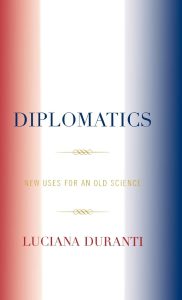 Diplomatics was originally developed in France during the seventeenth century in attempts to prove the authenticity of archival documents. It was later refined in European universities as a legal, historical, and philological discipline, and in the twentieth century it has primarily been applied to medieval and early modern documents in order to evaluate their authority as sources of research. Diplomatics embraces the perspective of the modern archivist, and investigates the origin, development, and application of diplomatic concepts. It examines the organizational and evaluative effectiveness of diplomatic concepts in the context of modern records and archival systems, and looks at the relationship between originality and authenticity in records. The physical and intellectual form of records is examined, and the traditional methodology of diplomatic criticism is clearly explained and augmented by tips concerning its archival use. Diplomatics was originally a series of six articles that appeared in Archivaria, the journal of the Association of Canadian Archivists. In addition to those six articles, this volume contains an introduction that provides a broad synopsis of diplomatics, including its unused potential to help rethink record organization and use in a multimedia age fraught with increasingly complex informational problems.