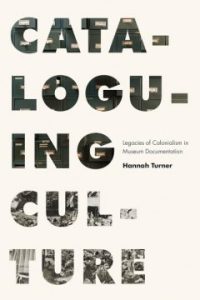 How does material culture become data? Why does this matter, and for whom? As the cultures of Indigenous peoples in North America were mined for scientific knowledge, years of organizing, classifying and cataloguing hardened into accepted categories, naming conventions, and tribal affiliations – much of it wrong.

Cataloguing Culture examines how colonialism operates in museum bureaucracies. Using the Smithsonian’s National Museum of Natural History as her reference, Hannah Turner organizes her study by the technologies framing museum work over two hundred years: field records, the ledger, the card catalogue, the punch card, and eventually the database. She examines how categories were applied to ethnographic material culture and became routine throughout federal collecting institutions.

As Indigenous communities encounter the documentary traces of imperialism while attempting to reclaim what is theirs, this timely work shines a light on access to and return of cultural heritage. Museum practitioners, historians, anthropologists, and media scholars will find the practices and assumptions of their fields revealed in this indispensable work.